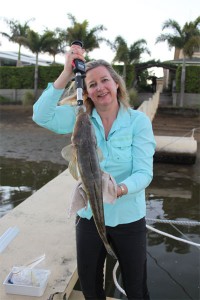 A big congratulations to Noel Day on the capture of his first 1m+ barramundi and to Lynnie Day on her 860mm barra…. welll done you two!

Great to see the dolphins back in the canals this weekend – which suggests there is plenty of bait fish around.

Proving you can catch decent fish off the canals, the pic on left of Robbie Drysdale with a flathead caught on 2kg off her pontoon.

The Boat ‘Hard Yakka’ lived up to its name when Greg Skinner fought a +60kg bronze whaler shark for 1 hour 40 before releasing it. They were fishing off Coloundra in 140 metres, and finished the day with an esky full of pearl perch…